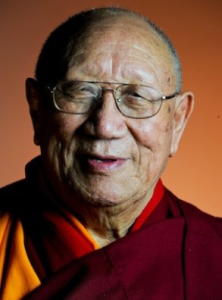 Kyabje Khensur Kangurwa Lobsang Thubten Rinpoche, was asked by HH Dalai Lama to provide the oral transmission of the complete Tibetan canon, the Kanguyur, to an assembly of 900 monks—a feat accomplished about once a generation and takes 6 months.

On the insistence of His Eminence Trijang Rinpoche (HH Dalai Lama’s Tutor), Khensur Rinpoche undertook the Great (three and a half year) Retreat on Vajrayogini.

In 1965, he completed his Lharampa Geshe , the highest possible degree in Buddhist Philosophic Studies.

After fleeing Tibet, he helped re-establish Sera Jhe Monastery in India, and was appointed Abbot by HH Dalai Lama. He also restructured Sera Jhe School, which has resulted in an extremely high standard and diverse curriculum, achieving outstanding results in examinations.

During the past 13 years, he taught in many centres in Australia, New Zealand, Singapore, Hong Kong and USA. Because of his extremely high qualifications, advanced knowledge and spiritual insights, Rinpoche was often requested to teach overseas and at Sera Monastery, where thousands of monks flocked to hear him speak.

A wikipedia page is available at https://en.wikipedia.org/wiki/Kyabje_Rinpoche